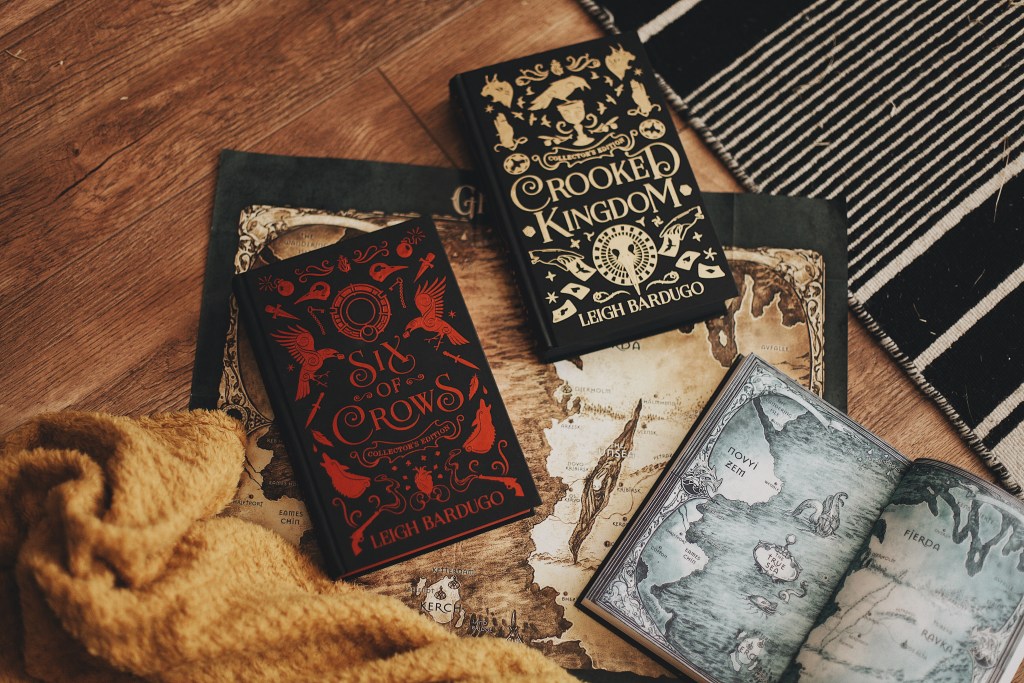 No Mourners, No Funerals

I took a walk down the streets of Ketterdam, I enjoyed what I found. If you are new here, I hope you do too.

Shadow and Bone trilogy by Leigh Bardugo, was a great series and I certainly enjoyed the story of Alina Starkov, it was a great introduction to the land of Grisha. A special Army of people who were capable of the impossible- magic. In the fictional land of Ravka, Grisha is an Army, who protect the nation. Their neighboring countries, Fjerda and Shu Han had very different ideas. In Fjerda the Grisha are hunted and killed for the crime of existing, while in Shu Han, they are experimented on to learn the secrets of magic that seemed to exist in them. I gobbled up the three books learning of Alina’s adventures, how she became a Summoner a Saint and I loved every minute of it. The characters were righteous and brave it was hard not to like them. When I picked up the book ‘Six of Crows’ by Leigh Bardugo set in the same fictional universe. I expected something similar. I was pleasantly surprised.

Set in the imaginary town of Ketterdam, this doesn’t tell the story of righteous men or brave heroes. It tells the story of a thief, a convict, a gambler, a desperate Grisha, a runaway, and a shadow. Six of Crows. Our story begins with Kaz Brekker the thief, nicknamed ‘Dirty hands’, a liar he is just about the worst person in Ketterdam. When he is hired to pull off a heist, no one can even dream of, he assembles a crew of unlikely members. Inej, nicknamed a Wraith, an acrobat a ruthless shadow who could escape any holding cell. Jesper, a sharpshooter with a gambling problem. Nina, a Grisha who can control the heartbeats of anyone. Wylan, the runaway son of a merchant who is keen on explosives, and Matthias a Fjordern soldier who is tasked with killing the Grisha. Maybe they can pull this off. If they didn’t kill each other first.

I could anticipate a hundred things going wrong, and I was wrong, a thousand things went wrong. As I flicked through the pages between betrayals, trickery, backstabbing and some fun surprises I realized I had come to care for this crew. Kaz who for all his faults and talk about money and money only, wouldn’t leave a crew member behind. Inej who for all the times she chides Kaz doesn’t desert him once. Jesper who for all his Gambling addictions only wants to help his loved ones. Wylan who after all the pain he endured, still remains innocent. Nina who for all her tricks and magic only wants love. Matthias who despite all he has learned starts to question himself. They fought together, bled together, and slowly learned to trust each other.

When things went sideways as they inevitably do in these situations, I found myself hoping against hope that these six beat the odds. Each time they said ‘No mourners, no funerals’ as good luck and goodbye, I silently wished it would not come to that. And of course I learned some lessons in deception. In the words of Kaz Brekker ‘If you can’t beat the odds change the game’. I found myself heaving a sigh of relief when I found after each foiled plan that Kaz always has a backup plan. I loved the action, the dialogue, the crew, and the fast-paced story. I could imagine myself going on a heist with these common criminals and thieves. I could see myself in Kaz when he schemed on, I found myself looking for a semblance in Inej and Wylan. Despite the darkness that surrounded these characters I found myself thinking what would I have done if it had been me.

I took a walk down the streets of Ketterdam, I enjoyed what I found. If you are new here, I hope you do too. But if you have walked these crooked streets before, then let’s do it again together. Nina tells me there’s a place around the corner that serves the best waffles in town. We can watch the boats drift into the harbor. And I can tell you an old story of the thieves who did the unthinkable. Keep an eye on your wallets though, I hear there are pickpockets here.